The British Music Experience is a unique, permanent exhibition dedicated to the history of popular music in Britain.

Interactive Timelines covering 1945 to the present day span the outer walls of the circular exhibition space which is split into 6 musical eras, each with it's own space coming off the central core.

Working closely with Land Design Studio, Clay were able to fully integrate the Timelines into the architecture and design of the individual spaces which each have a unique look and feel based on the musical era they present.

Each ultra-widescreen Timeline has a higher than HD resolution screen projected 4 meters high and connects to a series of ceiling mounted speakers. The timelines present the thousands of interesting facts, movies, images, news headlines and music to visitors in a fluid real-time playback engine that combines concepts of digital wallpaper and interactive exhibit.

Individual users explore the large amount of content using just a single trackball, choosing the things that interest them most. A separate terminal allows for multiple users and also provides access to the optional accessibility features, such as automated speech reading of text entries.

When not under the control of a visitor, the timelines randomly wander through the content themselves, keeping the spaces alive and inviting even when empty.

The Timelines integrate with the RFID Smart Ticket system that allows visitors to bookmark content for later retrieval via the MyBME website, and the curatorial team at the British Music Experience can update Timeline content easily without relying on external suppliers or specialists, enabling them to keep the exhibition fresh and up-to-date with minimal cost.

Ever wondered if a famous Pop Star came from your town?

In this exhibit visitors explore a giant map of the UK, finding images and facts along the way using an intuitive trackball interface, whilst bystanders can watch key content animate across the map and present itself on a vertical screen.

Five projectors with varying resolutions and sizes are seamlessly blended into a single multi-resolution surface that allows high definition content where required and provides a vibrant and playful exhibit.

A unique and engaging way to rummage through dance music history.

Starting in 1965, "Hey DJ!" arranges key moments in British dance music as an interactive DJ's record box that visitors to the exhibition can flick through and explore.

As well as hearing each track, visitors can see videos, images, interviews and other interesting facts shoot out from the album covers.

Key connections between artists and tracks are also signposted, encouraging the visitor to go beyond tracks they might already know.

All the content can be effortlessly moved around and explored using intuitive touch screen gestures thanks to the fluid and responsive interface we developed.

Clay were responsible for curating, writing, designing and producing this piece, working with subject matter experts Sally Rogers and Steve Jones of A Man Called Adam.

Containing over 500 objects, with everything from Acker Bilk's clarinet to Amy Winehouse's dress, the BME's permanent collection of memorabilia is organized into 21 individual showcases spread throughout the museum.

Using a novel touch interface visitors access more in depth material on key case items by sliding their hand across a Guitar Fret Board or Piano Keyboard. The resulting movies present the visitor with content explaining the significance of the object using contextual material.

Some cases include projections onto the artefacts that allow the user to see the objects they are selecting light up with customised animated highlights.

Anatomy of a Pop Star

Using a novel statue interface, visitors can discover the team of expertise that lies behind the modern Pop Star.

Thirteen roles including Producer, Video Director, Vocal Coach and Manager can be explored by touching a particular part of the statue who's shadow responds and morphs into a caricature illustrating that role.

Containing interviews with key record industry professionals animated with videos and images of the artists being talked about, the piece is an entertaining and sometimes surprising look behind the scenes of the record industry.

This exhibit was supported by PRS for music.

A suite of interactive music pods where visitors can get tuition and play along with their favourite artists on an instrument of their choice.

The music pods also fully integrate with the BME's RFID Smart Ticket system, from an initial swipe that logs a visitor on, to providing recordings of a visitor's performance at the BME from home. Supervisor Smart Tickets also allow staff to easily control the length of time visitors can spend on individual instrument stations.

Instruments were provided by Gibson and the lesson movies were produced by Now Play It. Sennhesier provided microphones and headphones.

Using our proprietary generative audio software 'Pure Events', Sally Rogers and Steve Jones were commissioned to create an audio palimpsest based on the last 60 years of popular music.

A real-time ever-changing mix of over one gigabyte of audio samples is output to a multi channel speaker-scape arranged concentrically overhead in the central space of the exhibition.

As well providing an ambient backdrop to the experience the piece helps turn what could have easily become be a cocophy of sound pollution from the many exhibits into a more relaxing musical atmosphere. 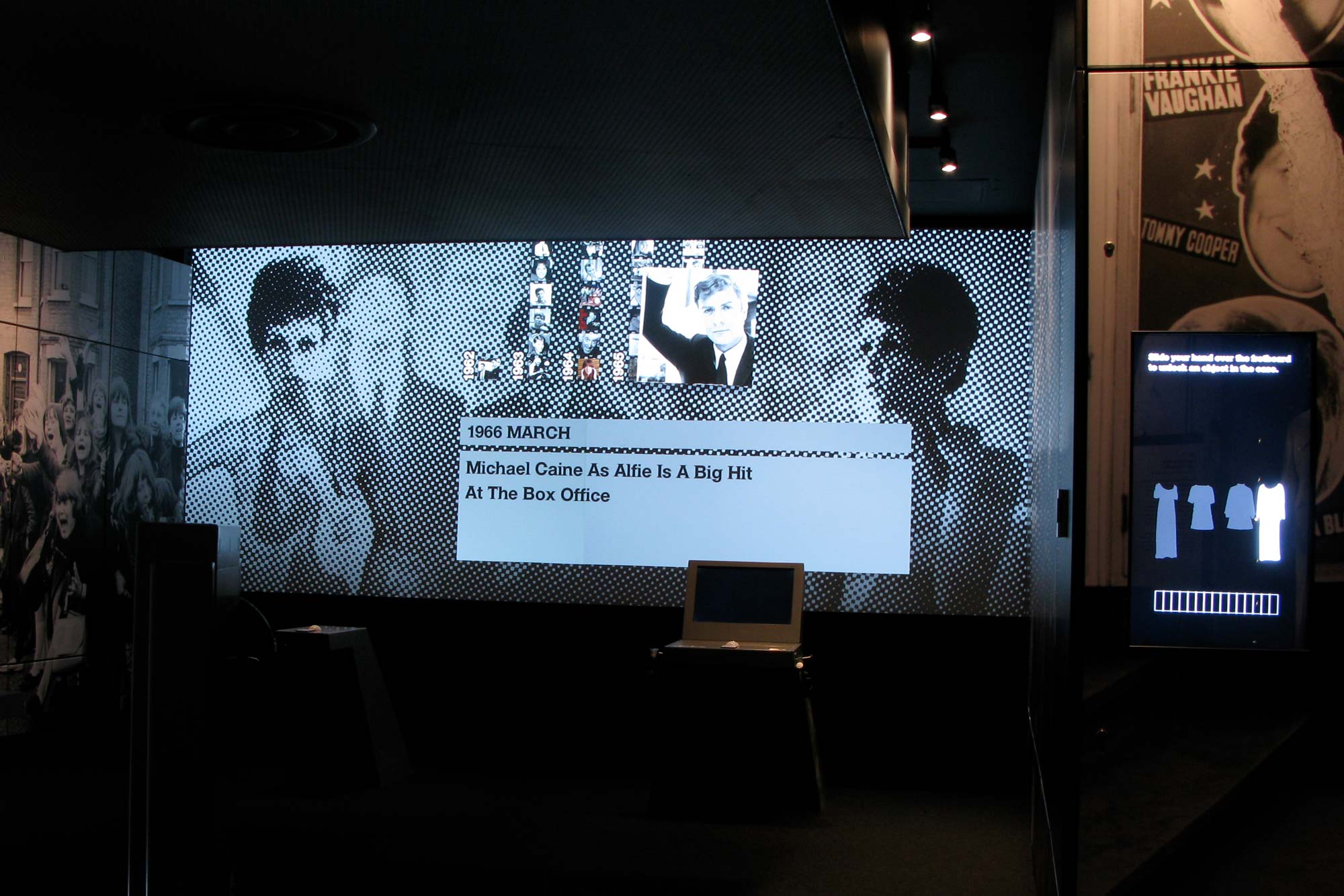